ANDRES is a 100% employee-owned company that has been building long-term relationships in Dallas, Fort Worth, Austin, & Houston since 1991. The company's proudest measure of success is its list of repeat clients and the valuable relationships built with top-tier architects, engineers, subcontractors, and suppliers. ANDRES views each project as an opportunity to develop a new client into a repeat customer. 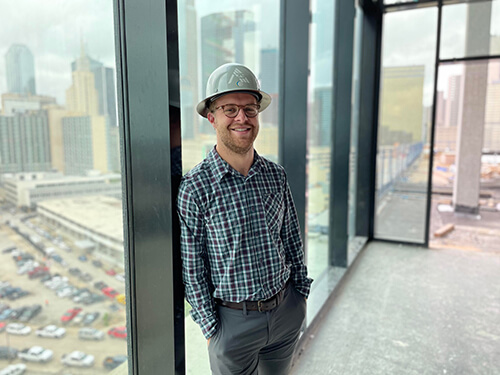 We are currently using five active plans for this project due to its sheer size and scope. Touchplan made it easier to break up the work into bite-size pieces and have solid information for each task.

ANDRES Construction is no stranger to Touchplan. The prominent employee-owned Texas general contracting firm has been using Touchplan for the last several years and has completed numerous mixed-use projects that have added hotels, apartments, office buildings, and retail spaces to the Dallas Skyline.

So as the ANDRES team began work on one of their newest projects that is revitalizing a 1920’s era electrical building into a 20-story mixed-use tower within a rising Dallas neighborhood, not only did they know they would be utilizing Touchplan, they would find some new uses along the way.

For the East Quarter Meletio Tower, ANDRES is using Touchplan for subcontractor meetings and to set up the overall phases of the project that serves as a backbone for the project in line with the master schedule. They are also creating “Touchplan Boards” to use in the weekly meetings which are extremely helpful on the Meletio Tower project due to the number of subcontractors working on the project.

“We are currently using five active plans for this project due to its sheer size and scope,” said Andres project engineer Britt Jordan. “Touchplan made it easier to break up the work into bite-size pieces and have solid information for each task.

In addition to utilizing Touchplan for specialty Trades and overall management of exterior, interior, and general site and landscape work, ANDRES’ Meletio Tower project team was able to find a new use for Touchplan. The team was able to better coordinate deliveries to the project by having all delivery scheduling coordinated via Touchplan. “We created ‘swim lanes’ within Touchplan by the hour for deliveries, and we also had categories depending upon if trucks were using the north or south material hoist or at which entrance they were arriving,” said Jordan.

The team broke it out into every possible option for receiving deliveries and instructed the subcontractors to enter their deliveries in Touchplan which they could then review in their weekly meetings.

“Managing the project deliveries through Touchplan allowed for better accountability with all of our trade partners as well as our project team as the system made it very clear when materials were arriving who needed to be there on both sides to receive them,” Jordan said. “The subcontractors also saw the value in the scheduling.”

The East Tower Meletio project will be home to a 20-Story residential tower with 335-units including penthouses on the top two floors, a pool overlooking the city, a private bar for tenants, and a rooftop deck. ANDRES is already complete with and ready to turn over the 180,000 SF of office space and 25,000 SF of retail space.

Touchplan has played a pivotal role in keeping the project on schedule and has aided in heading off problems in the schedule before they occur. “Because we were using Touchplan to track both the interior and exterior portions of the construction, we were able to see that interior construction was beginning to outrun the exterior construction,” said Jordan. “While the critical path is usually the interior framing; the side-by-side comparison within Touchplan showed that we needed to slow the interior build to make sure we had walls and windows in place on the exterior. Using Touchplan allowed us to identify these issues months ahead of time and adjust our work to keep the project on schedule.”

Having ANDRES and their subcontractors using Touchplan has shown the value of being ahead of problems before they happen and is allowing the team to make sure they turn the building over completed on their June 2022 target date. 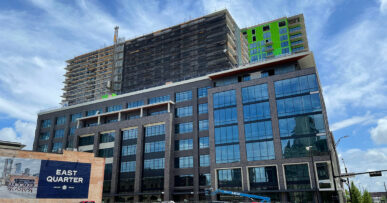 "Using Touchplan allowed us to identify issues months ahead of time and adjust our work to keep the project on schedule.”