BOND Building Construction, Inc. has managed many of the Northeast’s most complex construction projects. BOND operates as a construction manager for academic, healthcare, district energy, and life sciences clients.

Everyone saw the benefit of it once they realized that they had to work together as a team to build their schedules.

Lahey Hospital and Medical Center, one of metro Boston’s premier medical facilities, had outgrown its main campus at 41 Mall Road in Burlington, MA. The hospital, which features a twenty-four-hour emergency department, a Level II trauma center, over 300 hospital beds, and an ambulatory care center, needed to relocate its general internal medicine (GIM) department through a fit-out of a nearby 37,000-square-foot site. In addition, the hospital required a 4,000-square-foot diagnostic fit-out on the first floor, complete with a pharmacy, two X-ray units, and a blood specimen collection area. The hospital’s needs were complex. The new department needed to be up and running by August 13 and had to be moved from the midst of a functioning hospital into an occupied office building while minimizing disturbance to both locations through close coordination with the building operator. The location of the office building was key—it had to be within 250 yards of the main campus in order to maintain the hospital’s reimbursement structure. The project was budgeted at seven months and $8.5 million.

Complicating matters further, the project’s start date was delayed, but the opening date for the new location remained the same. The team needed to complete the project in an even more compressed time frame than they had anticipated. On top of that, there was a sudden change to the design once the project was underway, which created unexpected rework. Losing time against hard deadlines, the project was at risk of not being completed on schedule.

Fortunately, this project team was focused from the outset on working smarter, not harder. To facilitate the planning, Lahey hired a Lean project consultant, Hal Macomber, who uses planning technology on all of his projects. While he leaves the selection of software up to his clients, they consistently choose Touchplan.

Macomber, working closely with the Senior Project Manager at BOND, Ben Hoffman, determined that using a combination of takt planning and the Last Planner System in Touchplan would accelerate the project’s progress. The concept of takt time originated in Toyota manufacturing plants as a system of pacing production time to match the rate at which Toyota cars were being sold in order to keep up with demand

Macomber explained the takt planning process. “We said, ‘Okay, what’s the rate at which we would need to perform all of our takt so that we can be done by this time?’ It takes some working out. You need to know when you want to be done; you also need to learn what all the tasks are.” Key to this effort was breaking the pull planning process down to very detailed sequences of work. “It starts with determining the flow unit. For building a building, you’ve got space as your general flow unit. Your production flow unit could also be a system like an HVAC system. You start by designing your production flow unit, and then you work out the sequence of all the small steps that you can give. In the case of the Lahey project, the main flow unit was an examination room,” said Macomber.

Once the team had determined the production flow unit, they needed to specify the required components and duration of an exam room. “We worked out that from the moment we started framing until we were done putting a lock on the door, that every single step was done in a day. We determined that seven exam rooms was the batch size that they were going to use because the smallest trade was two people. That group of two people could do seven rooms in a day.”

With this planning structure in place, the team was ready to maximize their efficiency to recover lost time.

Our relationship with Bond Brothers has produced some mutually beneficial results including: 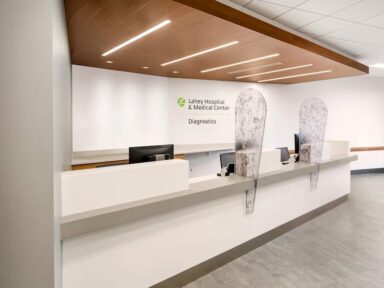 Touchplan's software held people accountable to the promises that were being made throughout the project.