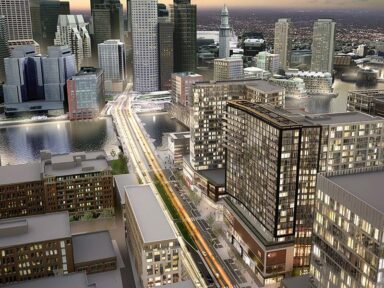 The Benjamin & VIA encompass Boston’s largest mixed-use project in over 30 years, spanning 1.5 million residential and retail square feet over three acres of land. Located in the heart of the Seaport District, The Benjamin (22 stories tall) and VIA (20 stories tall) are built to the highest standard of modern luxury and feature sweeping Boston skyline and Boston Harbor views, with over one acre of landscaped courtyards. The Benjamin & VIA qualify for LEED Silver sustainability certification.

A total of 832 modern apartment homes are located at The Benjamin & VIA, ranging from studios to three-bedrooms. Residences at The Benjamin & VIA are now open and leasing. At The Benjamin are 354 apartments; at VIA are 478 apartments. Floors 17 through 22 at The Benjamin feature studio to three-bedroom penthouses with ultra luxurious finishes including direct elevator access, private balconies ranging from 10 to 40 feet wide, dramatic floor-to-ceiling windows and breathtaking views. Penthouses have exclusive access to Hello Alfred, technology that simplifies home services such as grocery shopping and dry cleaning.

All The Benjamin residents come home to a five-star lobby with professional door attendance and 24-hour concierge service. A high-tech Butterfly cloud-based video intercom also allows Benjamin residents to access the building and admit guests. Two distinct outdoor terraces are located on The Benjamin’s fourth floor, including a Pool Terrace overlooking Fort Point Channel. A total of 8,000 square feet of common space are located at The Benjamin, including entertainment and relaxation lounges, a catering kitchen, a private dining room, an espresso bar, an executive business center and a fitness center.

Three distinct finish schemes are available in VIA residences for residents to choose from, ranging from warm cream tones to clean white finishes. VIA apartments feature open concept living spaces, oversized spa bathrooms, and quartz countertops. The building’s Fusion wing, a chic, minimalist innovation-focused housing component, features 96 studio and one-bedroom apartments with additional amenities including two work lounges and a ninth-floor terrace with stunning water views. An additional 96 apartments at The Benjamin & VIA are designated affordable